Jules Prudence Riviere
Born in Paris in 1819, Jules Prudence Riviere began his life long musical career as a choir boy in France before going on to establish himself as a phenomenal French composer. In 1857 the French Emperor and Empress presented him with a commemorative signet ring commending his astonishing orchestral performances. The success Riviere experienced in France brought him to England in 1857 where he instantly established a name for himself. With performances at the Adelphi and Alhambra Theatres, Cremorne Gardens and the Covent Garden Promenade Concerts he not only demonstrated his musical talent but charmed and enchanted audiences.

In 1887 Jules Prudence Riviere acted as musical director at Llandudno Pier Pavilion; during this time he pioneered the launch of the seaside promenade concert. After establishing himself in Llandudno, Riviere developed a forty-two piece orchestra who played regularly at the Pier Pavilion and were received as a massive success. 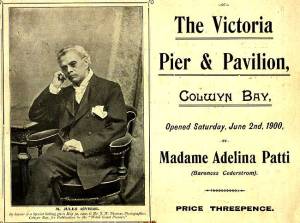 The lure of the new Victoria Pier in Colwyn Bay proved irresistible and in 1890 Jules Prudence Riviere and his orchestra were secured to perform for the opening season. At the official opening on June 2nd 1890 Riviere orchestrated a phenomenal concert which featured the critically acclaimed Madame Adelina Maria Clorinda Patti.

On moving to Colwyn Bay, Riviere’s took with him the name of his Llandudno Home: Bod Alaw, translating to ‘musical place’. However his residence in the town was sadly short lived as on December 26, 1900 Jules Prudence Riviere passed away, aged 81. He can be found buried at Llandrillo yn Rhos Churchyard.

Subsequent to his death, the street which he had lived for just 7 months was changed to ‘Riviere’s Avenue’ in honour of his contribution to Colwyn Bay. On St. David’s day, 1950, ‘Bod Alaw’ primary school opened to the public in what was Riviere’s home.

This book is twinned with Altogether Elsewhere (2017) by Jazzman John Robert Clarke. Read more about it HERE.