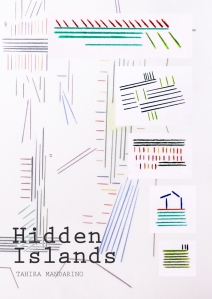 Hidden Islands
An Introduction to Thinking About the Islands Along the River Thames,Particularly Between Sunbury and Shepperton

“ISLANDS are secret, hideaway places. They conjure up exotic pictures of being, Lost then found, of survival and of solitude. On the Thames there are many islands, I have focused on 10 islands from Sunbury to Shepperton. These Islands are all private places. Imagine as you walk along, The river, The sounds and colours, Create your own space away from where you are now. Some Islands, Are natural habitats, with Tall trees, Lush foliage and dense areas To get lost in. Others are small communities, historical, weekend retreats, With laughter, And discovery, Adventure and making plans, Cooking Thinking and Being Some are wide open spaces, To play and explore, to walk the dog To run to after school, meet friends and catch up. They are our escape routes to somewhere new and undiscovered.”
Tahira Mandarino, 2015.

Mandarino’s current practice involves 2D works, on canvas and on paper. Much of the work derives from a preoccupation of the landscape as she relates to it. It is this relationship that then uncovers an inner reality, a woven mass of thoughts and ideas relating to the self, contained in a formless form, formed yes but not solid. Oscillating within the paintings is the need to be accepted and yet, often the scribbles represent an absence of language, a deflection of the self. Her paintings take on a palimpsest quality, the erasing and then reworking of marks over numerous layers. Previous study within ceramics allows a freedom and assurance to apply texture and develop form. Experimenting with her paintings in ways such as’ Arranging by Chance ‘has added a new geometric dimension. The mosaic of colours, tumbling or static can convey movement and stability perhaps even the emergence of architectural beginnings. In response to colour representation within the work, she seeks to explore the relationship colours have with each other and how this relationship is affected through placement and dimension.

To see more of Tahira’s work visit his website at…
http://www.tahiramandarino.co.uk/

On the Walk
A Sense of Place

“This map was inspired by my sensory experiences over the past four or five years at the Walled Gardens – Sunbury. An awareness of responding to something other than my eyes reminds me of the reasons I became a mark maker – this time frequently spent in or around these sites, sounds and smells have encouraged a connective way of communicating observations of the world around us. Specifically – the world around Sunbury Gallery and the Walled Gardens as I repeat my route and re-route of the roughened roads that direct me here. Only this time I have cause to stop and inhale spaces and places that catch my eye… or ear, or nose as was the new found lane from Thames St, past the back ends of the water works up to Upper Sunbury Rd. Following my usual trail I decide to take this map a different direction, both in thought and in journey – I find landmarks…and moments to contemplate, I feel and capture through drawings, words and hipstamatic heaven… a trail from gallery to palace – just turn left when you leave the Walled Gardens car park and follow the signs inside.”
Stuart Simler, 2015.

As a professional artist Stuart Simler is continuously exploring new ways to express what drives the impact that art can have however small on the viewer and in our community. The very significant idea of identity and being able to communicate what and how we feel as individuals, connecting with a wider audience. Working as an Art Educator he has already led a number of successful educational projects in local communities and delivered training for ‘Art as a Tool for Cross-Curricular Learning’ from an international platform. A developing theme of global citizenship is also present within his work, constantly growing with each artistic endeavour; the idea that we are all connected and responsible for one another’s wellbeing seems evermore relevant. Art can be fun, inspiring and inventive, like this map!

To see more of Stuart’s work visit his website at…
http://www.stuartsimler.co.uk/ 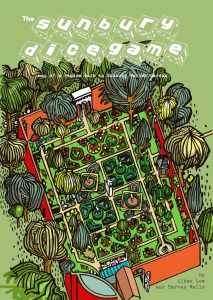 A random walk is a mathematical formalization of a path that consists of a succession of random steps. For example, the path traced by a molecule as it travels in a liquid or a gas, the search path of a foraging animal, the price of a fluctuating stock and the financial status of a gambler can all be modeled as random walks. The term random walk was first introduced by Karl Pearson in 1905 but random walks have been used in many fields: ecology, economics, psychology, computer science, physics, chemistry, and biology. 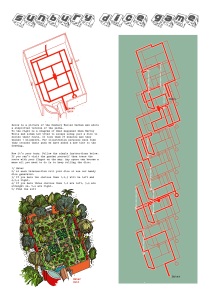 The definition of a random walk is dominated by a formula not by the act of walking, it exists mostly in the head not on a page let alone along a road. Alban Low and Harvey Wells give you the chance to put the random walk back on the map!

This map was inspired by The Dice Man novel published in 1971 by George Cockcroft under the pen name Luke Rhinehart. The book was based on Cockcroft’s own experiences of using dice to make decisions while studying psychology, the effect of this book and system used is one of subversivity and anti-psychiatry. The Sunbury Dice Walk is more of a repetitive adventure where the route becomes a maze. Alban and Harvey walked through the Sunbury Walled Garden armed just with a 6 sided dice to decide their route, their journey took 25 minutes in duration and 1km in length. In theory it could take you as little as 6 rolls of the dice to escape the Walled Garden or you could be stuck in there for infinity.

Harvey Wells and Alban Low have been walking and exhibiting together for 5 years. They have created art walks in London (SMartwalks), Chorlton (Chorlton Arts Festival), Cambridge (Art:Language:Location), Bath (Fringe Arts Bath) and Exeter (NOSE Festival). They featured in the AirSpace gallery’s Walking Encyclopaedia in 2014. They have already created and published one map, the Cambridge Blue Plaque Walk (ISBN: 978-0953471287).

To see more of Alban’s work visit his website at…
http://albanlow.com/ 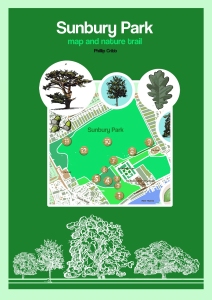 “Sunbury Park is rich in wildlife – trees, shrubs, herbs, birds, animals and insects. This map can be used as a nature trail and concentrates on the fine trees of the park.”
Phillip Cribb, 18th February 2015.

Phillip Cribb went to school at Gunnersbury in Chiswick and was further educated at the Universities of Cambridge and Birmingham. He is a co-founder and the current president of the Spelthorne Natural History Society which is approaching its 40th anniversary in 2016.

Since 1974 he has worked at the Royal Botanic Gardens Kew. He retired from the staff as deputy keeper of Kew’s world-renowned Herbarium in 2006 and is now an honorary research fellow there. He has specialised at Kew in researching the systematics and evolution of orchids, one of the largest families of flowering plants, an occupation that has taken him around the world on many botanical expeditions. He was chair of IUCN’s Orchid Specialist Group and is a trustee of Orchid Conservation International, both organisations concerned with protecting the world’s wild orchids. For many years, he was also a trustee of the Gilbert White and Oates Museum at Selborne. Phillip has lived in the area since 1956 and in Sunbury since 1972 and has taken a long-term interest in the borough’s wildlife.

This map was first exhibited at the Sunbury Embroidery Gallery in April 2015. http://www.sunburyembroidery.co.uk Thank you to everyone at the gallery and Spelthorne Borough Council for your encouragement and support