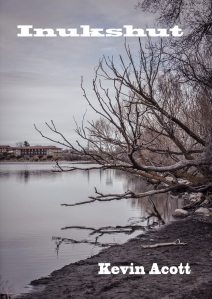 Inukshut is the second chapbook in Kevin Acott’s series as he travels down from Vancouver to San Francisco via Seattle, Washington State and Oregon.

“In March this year, I went to a First Nations restaurant in Vancouver and had one of the best meals of my life. While I was waiting to be served, the manager bought me a book to read. It was a book about the systematic removal, abuse and stripping of identity of hundreds of thousands of First Nations, Metis and Inuit children in Canada. Earlier that day, I’d been reading on the Guardian website about the forced deportation of children from the UK to Australia and the discovery of the remains of hundreds of  babies in a mass grave in Tuam in Galway.  I found myself momentarily resenting the bloke in the restaurant for showing me the book: all I wanted was an ‘exotic’ meal…”
Kevin Acott

Kevin Acott is a London-based model, cult singer, poet and astronaut. He’s currently having a few months off to wander about a bit, take photos, hang around, watch, be watched, talk, listen, write down everything everyone says to him, worry about injuries to Spurs players and eat cheese.

This book is dedicated to Misha, to the Salmon ‘n’ Bannock in Vancouver and to the survivors, families, journalists and supporters who are keeping the fight going.